Rising Housing Prices May Be Sign That New Bubble Is Forming

Do you believe history repeats itself? In a poll by Debate.com, 69 percent of the respondents said yes. If it does, rapidly escalating housing prices in the Tampa Bay area of Florida could be a sign that the housing bubble of a few years ago is about to repeat itself there and may indicate that the situation could widen to other areas of the country where housing prices also are flying high. 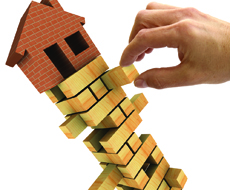 The Tampa Bay Times, a St. Petersburg, Fla.-based newspaper, reported that recent housing activity in the Tampa Bay area indicates history indeed might be on the verge of repeating itself. “No one likes to think the market could be destined for a repeat of the boom-to-bust catastrophe” that cost an estimated 7 million Americans their homes during the Great Recession that began in December 2007 and ended in June 2009, the newspaper reported. “Yet,” the report continued, “one research and consulting firm (Smithfield & Wainwright, based in Ponte Vedra Beach, Fla.) says a data-based analysis conducted of the Tampa Bay metro area shows another bubble could be forming.”

This is scary news for those who believe history repeats itself. On the other hand, Hogan B. Copeland III, chairman of Smithfield & Wainwright, says, “You’ve got to be very cautious. You’ve got a lot of speculation in the market right now, a lot of flipping of homes.”


After struggling for years to recover from the Great Recession, home sales – and prices – in the Tampa Bay area began to rise dramatically two years ago. Now they’re soaring.


“The sharp price rises in some areas is a little scary,” says Joni Herndon, former chair of the Florida Real Estate Appraisal Board.


Herndon says downtown St. Petersburg’s condo market is “on fire” — five condos sold for more than $1 million in April alone — and that demand also is hot for newer homes near Tampa’s downtown.


“In South Tampa, builders can’t find enough (vacant) lots so they’re sending people door-to-door to try to get folks who’ve lived in those homes for years to sell,” Herndon says. “A perfect example — I grew up in Sunset Park and never ever thought that lots not on the water would sell for tear-downs. Now they’re doing it all day long.”


Despite the two-year-long rise in home prices in the Tampa Bay area, prices still are not as high as they were during the boom years of the 1990s.


Mary Pond, a Tampa real estate agent, says while real estate prices are rising in the area prices overall still are not as dramatic as they were in the boom years leading up to the bubble. She says she also thinks that current tighter lending standards will help prevent another bubble.


Lenders granting mortgages to people who couldn’t afford to make the payments played a huge role in inflating and bursting the last bubble.


Only time will tell whether the housing bubble is about to repeat itself in the Tampa Bay area, and whether – if so – it might spread to other areas of the country.