Until the Section 529 college savings plan came along, parents looking ahead to the high cost of college for their children often set up accounts under their states' Uniform Gifts to Minors Act (UGMA) or Uniform Transfers to Minors Act (UTMA). But the broad benefits of 529 plans have made them more popular than UGMAs and UTMAs in recent years. Here's how the two saving vehicles compare: 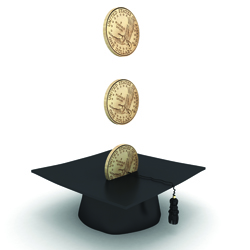 UGMA/UTMA accounts: These are custodial accounts to which you contribute money for a minor's benefit. As the custodian, you control the investments until the child reaches age 18 or 21, depending on the laws of your state.

However, for tax purposes, any earnings on account assets are taxed to your children at their lower tax rates. For 2017, the first $1,050 of earnings in a custodial account is tax-free and the next $1,050 is taxed at the child's rate. But earnings beyond $2,100 are generally subject to the so-called kiddie tax—they're taxed at the parents’ top rate. And whether you pay or your child pays that tax, it creates an annual drain on the account during the years you're trying to build up funds for college.

Section 529 plans: With this type of state-sponsored plan, you contribute to an account for which you name your child as beneficiary. Then you're in charge of how the money is invested (though only among the options the plan offers, and the ability to switch investments is limited). Unlike in a custodial account, earnings from investments aren't taxed while they're accumulating. And distributions from the plan that go to pay qualified college expenses, such as tuition, also aren't taxed.

Those provisions give 529 plans a dramatic advantage over a custodial account. There aren't any kiddie tax complications with a 529 because the growth in the account you've set up for your child isn't taxed at all during the years leading up to college. And whereas you may owe capital gains tax when you sell investments in a custodial account to pay college expenses, that doesn't happen when you take money from a 529 to pay for college.

In addition, if your kids have a custodial account, they get control of the money once they reach the age of majority in your state—and they can use it any way they want, not just for college. That doesn't happen with a Section 529 plan—you stay in control of the account regardless of the age of the beneficiary.

A final disadvantage of a custodial account is that it may hurt a student's eligibility for federal financial aid because it counts as that student's asset, not that of the parents. Section 529 plans, in contrast, are treated as if they belong to the parents and aren't likely to affect financial aid eligibility.

So while there may be situations in which a custodial account makes sense in saving for college, in most cases a 529 plan will work better.