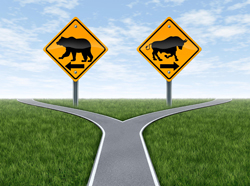 The stock market is known as a leading economic indicator — that is, it tends to rise or fall in advance of economic gains or losses. That's what happened when a notorious bear market bottomed out in March 2009. Finally, several months later, the U.S. economy, too, moved into positive territory, although the recovery has been painfully slow by historical standards. But during most bull markets, the economy is strong and unemployment low. Consumers feel relatively confident, and their outlays help fuel economic growth. And because times are good, people usually are more than willing to take the risk of owning stocks.

Conversely, worries about the economy may make investors sell their stocks, and that drop in demand can lead to a bear market. Usually, prices will begin rising again after a fall of 40% or so. But in a particularly bad bear market, such as during the Great Depression, that percentage can be significantly higher. As the economy sputters and unemployment rises, investors shy away from taking risks in the market.


The best strategy to use in a bull market is to try to gauge sector and broad market trends and invest wisely. Just don't be tempted into thinking you can time the market better than anyone else.


It's a little trickier during a bear market, but there are some options. For instance, you might consider "selling short" -- borrowing stock you don't own, selling it, and waiting for the price to drop. Then if you're able to buy back the stock at a lower price, you'll profit. U.S. Treasury Bonds also may be a sound investment when stock prices fall, in part because of demand by U.S. and foreign investors looking for a safer place to put their money. You also may decide to invest in defensive stocks, such as those of utilities, which usually don't fluctuate much in times of uncertainty.


But the main thing to learn from stock market history is that you have a better chance of succeeding by maintaining a long-term approach. Over time, the stock market bounces back from bear markets, and it's advisable to not buy or sell stock just because the market is bullish or bearish. Being informed and methodical will serve you better than selling stocks in a panic or trying to jump on a bandwagon.